Save the date: Mon., April 20 of Milwaukee Beer Week.

Presented by Craft Beer Compass and Milwaukee Craft Beer Exchange at Brenner Brewing Company. Ticket will include entry to the event, participation in the bottle share and beer exchange, a pour of Brenner beer and screening (with the co-directors on hand) of Blood, Sweat, and Beer: The Movie.

As a highlight of the inaugural Craft Beer Cluster Flock, we’re going to host a huge bottle share. This is going to be a classic bottle share, and depending on how many participate we may have to break up into groups. But, here are the specifics:

Bring one large format beer or two (of the same) small format beers to share.

Beers should be 93+ on rate beer, unique, rare or out of Milwaukee distribution, highly acclaimed/sought after, or just all around awesome. Bring the good stuff, because the rest of us are!

Bring your favorite tasting glass or even a few to share. There will be plastic cups provided by Craft Beer Compass/Milwaukee Craft Beer Exchange/Brenner Brewing.
Once we hit 20 people, we will break up into groups of 10. So, if there are 40 people sharing, we’ll have 4 groups of ten.

Beers will be tasted one at a time. Everyone, in his or her respective group, will get a small sample to taste and talk about. Group collectively decides what order they want to taste the beers in.

Let’s pack the house and taste some awesome beer.

In its most basic form, The Golden Elephant is as follows:

* If you don’t have it wrapped or in a bag, we will provide a bag.

The bottles are placed in a central location, and participants determine in what order they will take turns selecting them.
* We will draw names from a hat.

We will gather around a table and sit in the order in which we picked names. The first person opens a wrapped bottle and the turn ends.
On subsequent turns, each person can open a new bottle or can choose to “steal” another person’s unwrapped bottle. When a person’s gift is stolen, that person can either choose another wrapped bottle to open or can steal from another participant. After a new bottle is opened OR after 3 consecutive steals, the “round” is over.

The game is over when the last person goes and the first person goes again.
* The person who opens the very first beer gets the last “steal”. But, that person can ONLY steal “unfrozen” beers.

The Nitty Gritty of the Golden Elephant

-Each beer can ONLY be stolen once per “round”.

-Once a beer has been stolen three times, it’s “Frozen”, meaning no one else can steal that beer. *“Frozen” beers will be indicated by being put pack in the packaging, or taken out of sight/off the table.

-The person who opens the very first beer gets the last “steal”. But, that person can ONLY steal “unfrozen” beers.

-The beer you bring must be rated 93+ on rate beer, be rare or out of MKE distribution, highly sought after, or really freaking awesome. Bring the good stuff, because all of us are! Use good judgment!

-Let’s keep it fun! We’re all walking away with great beer.

Don’t drink and drive.
We have partnered with Uber so you have a safe and affordable means of transportation the night of the event. 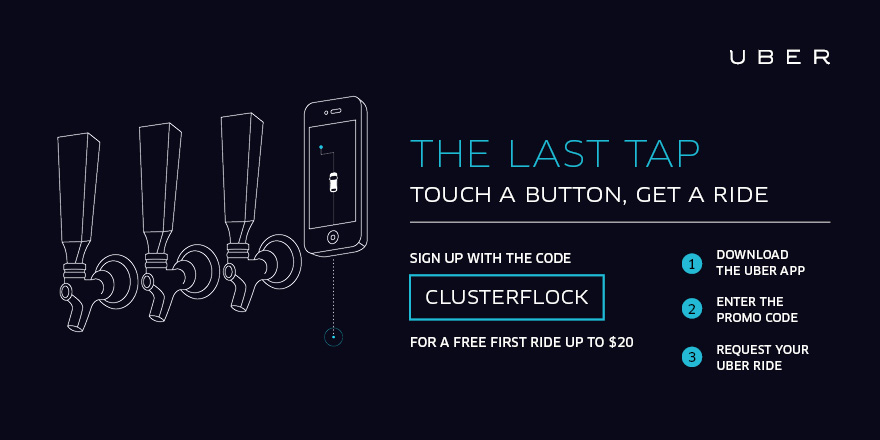